skip to main | skip to sidebar

O, Give Thanks to the Lord! 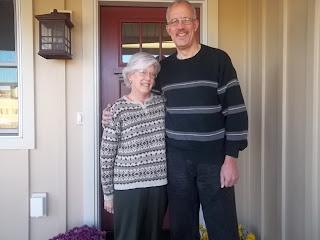 Sue says: How we thank the Lord this year that we can share a meal for Thanksgiving with family members in our new home. We will be blessed to eat off our own plates and share traditions together.

One tradition is to tell each other what we're thankful to God for in the past year. Jeff getting an identification of his malady and getting treatment, plus a place of our own to use to share with others top my list.

I've been making Swedish veggies and cranberry-orange mold to share. Our son will bake chocolate pie, and with his son, he'll prepare salmon ball. They'll bring something to share just like the native Americans did with the Pilgrims at their first Thanksgiving.

The best things are meant to be shared!
Posted by Pair O' Grafs at 11:15 AM No comments:

How Great is Our God!

I have been suffering from intestinal problems, lower back pain, and headaches for the better part of two years. They started before we left Papua New Guinea (PNG). In the process I have seen many doctors, who were not able to come up with a diagnosis.  In this long ordeal I really had began to identify with the woman that Jesus healed after she had been sick for 12 years. I knew that I had some kind of critter living in me, but no one could find it.

That is no one until the Lord put some remarkable events together.

Before leaving the DC area for Blacksburg, I made sure to visit a tropical medicine specialist in one last attempt to rule out any kind of weird creature inhabiting my bowels. After running many tests for many possible causes, she along with my primary care physician said that I was healthy as a man my age could expect to be. (Whatever that means!)

Coming to Blacksburg I continued to have symptoms which included waking up with headaches every night. This started me in on a new round of doctor visits with the last one to a gastroenterologist who said in effect that it was all in my head. However, she did mention something that led me to find the right people for the job. All along I thought that I had a problem with my digestive tract, but she told me that the pain in my lower abodomen that I constantly felt ebb and flow in intensity was not there but in my bladder.

This led me to Google the words "bladder" and "parasites," and I found the perfect culprit, a disease called schistosomiasis. It is transmitted by fresh-water snails, and depending on whom you ask may or may not be present in PNG. Around 2 1/2 years ago while in PNG I had hiked the Kokoda Trail, and that is where I thought I may have picked up the critter that causes the disease.

Next comes the "God Thing."

I was asked by a second-year medical student Clay to mentor/disciple him. We had met several times, and when he inquired about my quest to find and eliminate the mini-creature inside of me, I gave him an update. When I told him about the schistosomiasis, he thought of his mircobiology prof, who had worked in Borneo. While there he had acquired extensive experience in diagnosing tropical diseases.

Without going into too many details, I supplied these two men with the necessary samples for them to analyze, and lo and behold in the final sample right before they were going to turn out the lights and go home, Dr. Jim, who was Clay's instructor, saw what looked like a creature with two nucleii. Even after staining the tiny microbe was nearly invisible. It took a trained eye to spot it, and Dr. Jim nailed it. The other fact that they were able to confirm is that it did after all live in my digestive tract and not my bladder.

At first they could not tell what they had found, but later they identified the creature as a dientamoeba fragilis. (It is not an amoeba but a flagellate like a paramecium. You can learn more about it here http://www.cdc.gov/parasites/dientamoeba/index.html.)  Suffice it to say that there are not too many of these creatures inhabiting our shores.

Today, I picked up $10.00 worth of pills to kill the thing. Please pray that the treatment will be effective.

PS Clay told me that they were happy to discover that I did NOT have schistosomiasis because it often leads to bladder cancer.

We have not been the best bloggers since moving to Blacksburg. One reason for this is we do not have Internet service in our rental house, so we go to various businesses in town to log-on and do our browsing. Right now I am in a local supermarket drinking some ice tea while Sue is shopping. The purpose of this post is to give you all a brief update.

In July we got to visit our families in California. We enjoyed much good food, fresh fruit, and great fun with Sue's folks and brother and sister-in-law. We traveled north to spend a couple of days celebrating our 38th wedding anniversary in the California gold country. We stayed in a bed and breakfast in the town of Sonora. We enjoyed the fresh mountain air, a play, some wine tasting, and general relaxing. After our visit there, we spent a weekend with my step-mom and brothers in Sacramento.

The picture below was taken in Columbia. I picked this one for our Papua New Guinean friends so that you can see in some parts of the USA the wild west still lives! 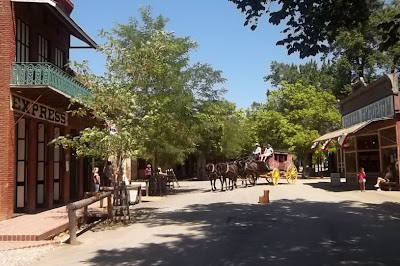 After returning from California Sue started her new job as the administrative assistant to the principal at Pathway Christian Academy. I got to fill in to teach a couple of Bible classes to high school students. Sue is really enjoying the challenges of her new assignment, and she has a good working relationship with the teachers and staff. 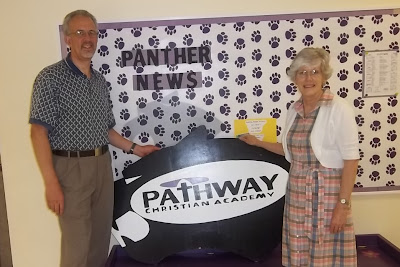 We have enjoyed being near our children and grandchildren. Sue and I have gladly filled in as babysitters. We have great meal times together. I think our kids enjoy introducing us to their hometown. They are a wealth of information, and we are really grateful for their suggestions for things to do, places to shop, and for great places to eat.

The picture below was taken last weekend. We took a hike to the second highest waterfall in Virginia. It was the first hike our three year-old grandson took under his own power. His Internet name is "Sprout." His brother "Little Man" is sitting next to him. Our son "Daddio" is also pictured. 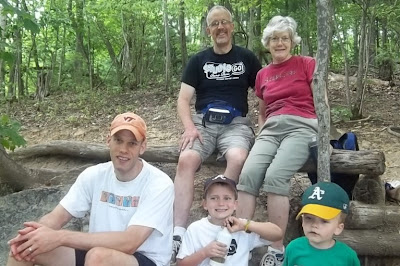 Finally, our big news is "WE BOUGHT A HOUSE!" After months of looking we found a nearly completed house that is less than 100 meters from our son's house. We have been in the process of picking out paint colors, tile, landscaping, and etc. The builder has been great to work with. We are looking forward to eating from our own dishes again! Lord willing, we will move in October 10. 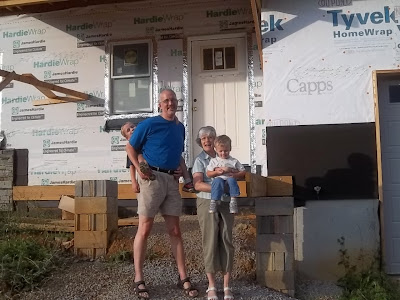 Thanks for keeping up with us. Continue to pray for us as we readjust to life in these United States.
Posted by Pair O' Grafs at 4:40 AM 1 comment:

Sue says: Some 200,000 in the power district in which we live are without power after two storms which toppled heavy branches and snapped entire trees off in several East Coast states. The daytime temps have been in the 90s (30s for Centigrade friends). A large number of us had our cell phone and internet service go off as well. Many are removing rubble from their roofs and yards. The sound of the chain saw is a common one. In the neighborhoods without power, that sound is absent.

When the first storm hit, we were housesitting the home with the chickens. That house was unscathed, at least by falling limbs. But the house next to it was hit by a downed pine bough that damaged the next-door  roof.

Now we're living in our second house-sit. It's been without power for five days. Ice is hard to find to keep things in the fridge and freezer cold. We're eating up what might spoil. This second house comes with a poor old Lab that has urinary problems. She welcomes us to the house every time we return, though. There's something cheery about a welcome when one has been without one's own place for a year. 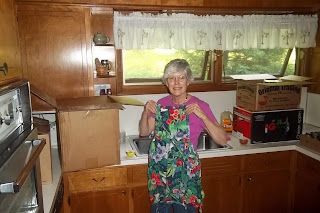 We're moving a few of our things into a third house, one we'll rent for a while. This one has power! It's a house that's been seldom-used for some twenty years, but it's furnished. 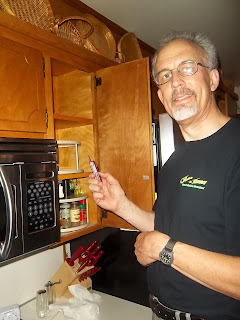 The kitchen has some spices, staples, and textiles stocked! We were able to clean our clothes in the new front-loader washer and drier. 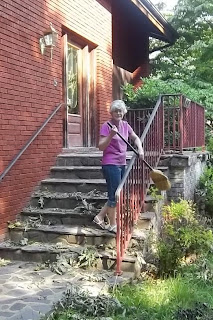 For the next week, we'll clean up in the yard and use the power for short times at the rental house. Then we'll return to our happy Lab and powerless house-sit.

Today the principal of a private school will interview us. A bus-driving company called Jeff for an interview too. It's pleasant to have choices!
Posted by Pair O' Grafs at 10:54 PM No comments:

The Lord be praised that we both have job interviews at a local Christian school next Tuesday! We also have some other ideas for jobs. Next week we will move into a temporary rental home that's furnished too. It is such a help to our mental health to have these things lined up. We send our thanks to those who have prayed for our transition. 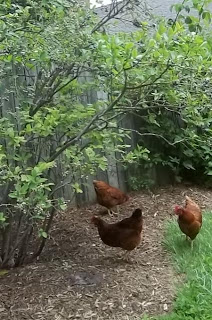 Sue says:
Aaah, the country life. Small town Blacksburg is a sharp contrast to metropolitan Lanham. A family in our church has graciously allowed us to housesit for them while they vacation. The job includes caring for the chickens a grad student left behind after graduation. It is so amusing to watch these hens half jump and half fly to pick blueberries.

While helping the home owners, we also have time to look for other work in town. Jeff has dutifully applied for several positions. Too, we want to be ministering in this community. Your prayers about these matters are appreciated.

Praises are this beautiful home to stay in, our kids and grandkids nearby, a warm welcome from our home congregation, and a furnished home that we can rent at a very reasonable price beginning in July.
Posted by Pair O' Grafs at 11:56 PM No comments: 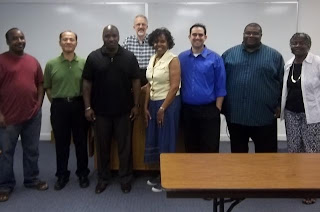 Sue says:
Can you believe it? Jeff has already completed teaching a summer class! He and this group of students met for several hours each of five nights in a row to cover the missions course material. Then the students handed in written work the next week. They're all finished up now.

Next items on our agenda: say our good-byes and pack up to move to Blacksburg.

Frequently Asked Questions About Our Ministry